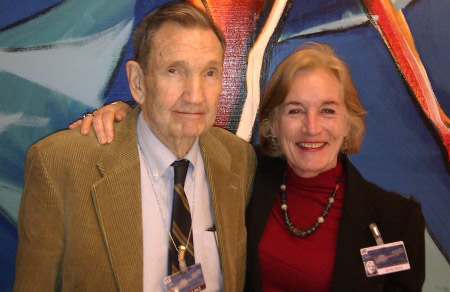 When the Americans and their guards did come out, the sky was black with smoke. The sun was an angry little pinhead. Dresden was like the moon now, nothing but minerals. The stones were hot. Everybody else in the neighborhood was dead.

So it goes. – Billy Pilgrim in Kurt Vonnegut’s Slaughterhouse-Five.

On 5 February, Webster Geneva faculty member, Dr. Maryvelma S. O’Neil attended the inauguration of an exhibition at the Military History Museum in Dresden that commemorates the 70th anniversary of the catastrophic firebombing of the medieval city by RAF and USAAF bombers at the end of the Second World War.

The theme of the exhibition was Schlachthof 5 Dresdens Zerstörung in literarischen Zeugnissen Eine Ausstellung zum 13. Februar 1945 (Slaughterhouse-Five. The Destruction of Dresden on 13 February 1945 in Literary Texts).

Dr. O’Neil contributed an essay on Kurt Vonnegut’s Slaughterhouse-Five, the most famous account of the devastation of Dresden, which he experienced firsthand as a young American POW billeted in a municipal slaughterhouse during the attack.

In a letter to his family Vonnegut wrote: “Our job and the Russians’ job, was to clean up after the American Air Force with picks and shovel.  Dresden had taken an awful pasting; almost every building was a floorless shell or had been toppled into the street.”

Dr. O’Neil’s essay was dedicated to former U.S. Attorney General Ramsey Clark, who knew Vonnegut personally.  Clark’s suggestion, offered during a visit we made to the museum in 2012, that Vonnegut’s anti-war novel should serve as the centerpiece of the commemorative exhibition, was well heeded.  The Purple Heart awarded him on 22 May 1945 was among many personal documents on display.

Kurt Vonnegut may have declared at the outset of Slaughterhouse-Five  there was “nothing intelligent to say about a massacre” yet his novel prevails as one of the most beloved, indelible, and influential works daring to address — and expose—the utter futility of war.