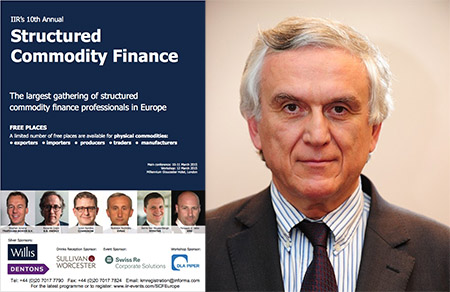 Dr. Rouben Indjikian, lecturer in commodities and trade finance at Webster University Geneva, has been invited by IIR- IBC Financial Events of Informa, “…one of the world’s leading knowledge providers...” (see www.informa.com), to speak, moderate and chair at the IIR 10th Commodity Finance Conference, which took place on 10-11 March 2015 in London (http://www.iiribcfinance.com/event/Structured-Commodity-Finance-Conference).
Prof. Indjikian was speaking at the session on oil and gas prices, moderating the session on Russia and chairing the second day of the conference.

The conference is in its 10th edition, and is one of the leading events in the area of commodity finance. The latter is essential to maintain the flow of international trade in commodities.  Institutions participating in the event included: such banks, as Citi Bank, Commerzbank Deutsche Bank, Fimbank, Gazprombank, HSBC; insurers, as Swiss Re, Coface, Willis; companies as BB Energy, Bunge, Mercuria, Metinvest, Shell International, Trafigura, Vale. Lawyers, and other service providers, international civil servants and academics were also among the speakers of the conference.

The conference sessions of the first day, included global bankers and traders panels, discussions on pre-payment finance, shadow banking and alternative (non bank) finance. The state of markets such as oil and gas, metals, and soft (agricultural) commodities, were also reviewed. The second day was devoted to such themes as regulations of commodity markets and finance, credit insurance and country risks, fraud, as well as the risks of and opportunities for commodity trade and finance in various countries and regions (Russia, Ukraine, Africa, China and Latin America). The conference was concluded by assessing the future of structured commodity finance.

According to Dr. Indjikian, the dramatic fall in crude oil prices, last year, while reminding the collapse of prices after the crisis of 2008, is more of a structural nature. In previous case prices quickly rebounded to the level around 100 dollars per barrel, however, the current lower oil price regime may stay a bit longer, due to weak demand in the world economy and the increasing level commercial and strategic stocks of crude oil, reflecting the excess productive capacity, in particular, due to shale revolution in the USA. The terms supercycle and peak oil also became much less popular. At the same time more than 7 per cent growth of Chinese economy, which became much bigger in absolute terms, as well as dynamic growth of India, means that demand side could catch up fairly quickly. So, in absence of further technological advance, energy conservation, and reliance on alternative sources of energy (which means also missing the sustainability and climate change targets), higher prices on oil and gas could again become a reality in medium-long term. Increasing geopolitical tensions in FSU and Middle East and North Africa, also represent a challenge for international trade in commodities, and in particular supply of hydrocarbons.  So the world energy scene continues to face major challenges from both supply and demand side.

The sessions on regions showed different expectations of participants depending on political risks of doing business in countries endowed with natural resources. The US shale revolution, prospects of increasing production in Africa, good prospects of doing business in Asia and Latin America are suggesting a continuation of upward trends in commodity trade and finance. At the same time the resolution of crisis in and around Ukraine could take time and may have negative implications on Ukrainian, and Russian economies as well as their main European trade partners.

As discussion of regulations and state of banking and insurance showed, the increasingly complex and costly regulations and compliance requirements, while addressing problems of taking excessive risks by financial service providers, have at the same time negative implications on access to finance, especially for midcap and smaller firms. As a result in spite of low interest rates, and hence lower cost of credit, difficulties to access to bank credit force the small and medium sized enterprises, to go for alternative non-bank sources of financing and end up with more expensive and more limited sources of financing.

The main conclusion from the conference discussions is that while businesses realize the necessity to adapt to stricter regulations through better organization and compliance, they are still optimistic concerning opportunities to finance locally, regionally and globally the production, transportation and distribution of primary commodities and their semi-manufactured derivatives.