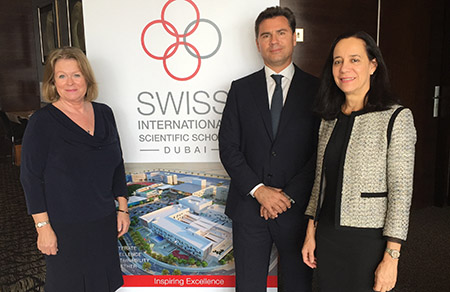 Omar Danial, BA ’91 and MBA ’97 and donor to Webster University Geneva has recently added another  notch to his growing list of achievements since he graduated from Webster.

Danial is Founder of a Swiss International Scientific School (SISD) in Dubai.  The school, which is scheduled to open in September 2015, will offer an outstanding bilingual IB curriculum focusing on both academic excellence and personal growth to enable their students to fully embrace their future opportunities.   They want to spark their students’ curiosity, support them as they become independent and inspire them to become life-long learners.  They will offer three sections: French/English, German/English and English with foreign languages.  To read more, visit www.sisd.ae.

Recognized as one of the most successful business developers, investment managers and entrepreneurs in Switzerland his achievements span from  Founder, President and CEO of Finial S.A., a family-owned investment company;  President of the Board of Group Manotel, a well-known hotel chain in the Geneva region;  In addition to his business acumen, Danial is a five-time world champion in offshore racing, winning the Super Boat OPT World Championship and the Super Board APBA World Championship.

Danial, has supported almost 30 students in pursuit of their dreams to engage in higher education at Webster University Geneva through the largest gift ever received by the Geneva campus for scholarships.  We wish Omar and his fellow alumni Joe Barchini, BA ‘90 and Mohammed Abdulhamied M. Seddiqi, BA ‘00 who have joined him in this venture, much success for their future.