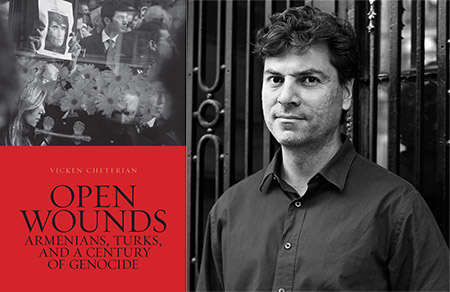 Vicken Cheterian (research faculty in the media department at Webster University Geneva) has just published his new book 'Open Wounds, Armenians, Turks, and a Century of Genocide' with Hurst & Co. in London. It is a research into a century of mass violence, its origins and consequences. Cheterian asks what happens if a major crime on the magnitude of a genocide happens while the international political class pretends nothing has happened? In the case of the Genocide of the Armenians by the Ottoman Turks during the First World War now a century ago is exactly that case. This book is a research on the consequences of the failure of international justice on a monumental scale, yet the recent debate about taking shape within Turkey on the fate of the Ottoman Armenians constitutes a source of hope. (www.hurstpublishers.com/book/open-wounds/)


ISIS and the Killing Fields of the Middle East, Survival, Vol 57, Issue 2, 2015, pp. 105-118.
In this article Cheterian traces the origins and evolution of the Islamic State in Iraq and Syria (ISIS), and how it differs of other salafi-jihadi movements like al-Qaeda a generation back. The article appeared in Survival, the prestigious publication of London based International Institute for Strategic Studies: (www.iiss.org/en/publications)