Alumni in the Spotlight with Sonia Sin 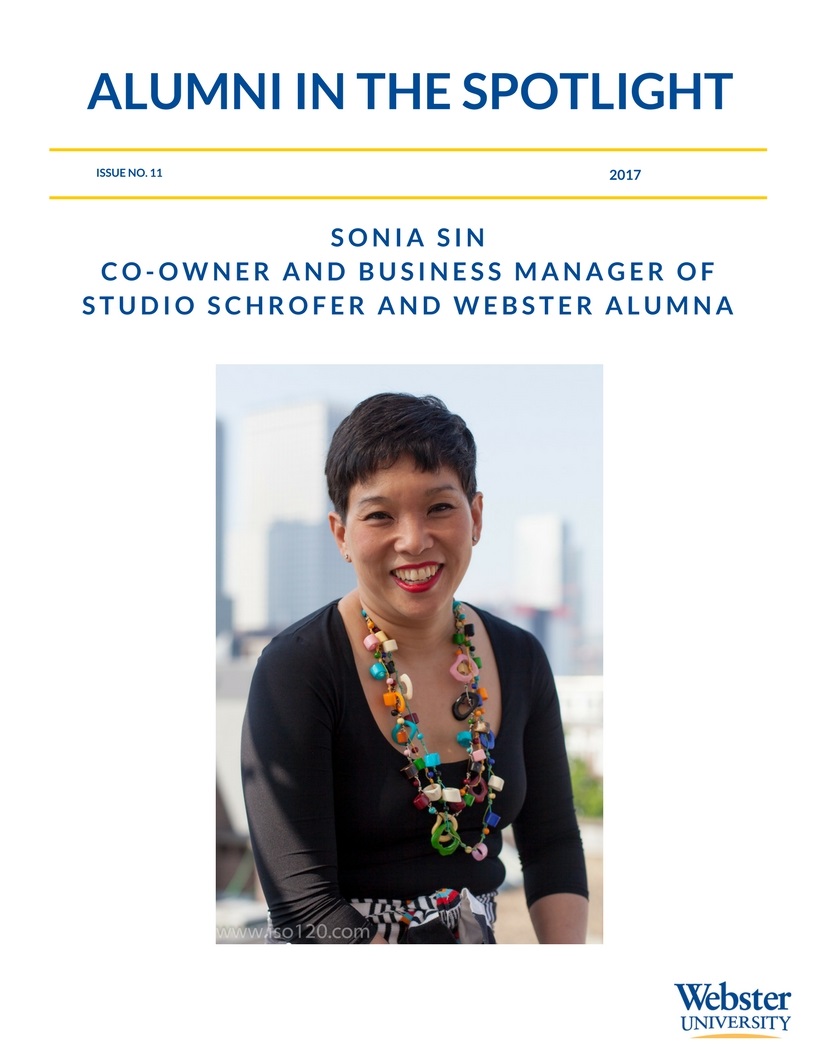 As Chief Cheerleader of award winning furniture design firm Studio Schrofer, Sonia Sin doesn’t have “normal” days at the office.  She champions good designs as enthusiastically as she does her political protesting, environmental activism and various philanthropies. Studio Schrofer has been recognized by the city of The Hague as one of its Creative Ambassadors. Sonia and her partner Frans Schrofer have decided to promote creativity as a tool for maintaining peace.“Get of out of your mental ghetto,” is her living credo. This mindset of hers is probably due to the fact that she creates and achieves so much.

I was born in Chicago to Chinese immigrant parents. We loved watching “Americans” do things. That gap between East-West cultures and mores led me to study history, culture, art, and later, fashion.  I got a Bachelor’s degree in Art History with a minor in Fashion Merchandising. To this day, I’m fascinated by how art and fashion interpret, react to and reflect the needs of the time.  All the great artists were rebels and I am, too.

When I moved to the Netherlands in the mid-80’s, I worked at the Mexx international headquarters. As Assistant Manager of a young, casual fashion brand, I cycled through various behind-the-scenes departments of Retail and Production. I became obsessed with the “segmentation” jargon used in the newly established Marketing department and wanted to learn more. Mexx sponsored my Marketing MA at Webster University. Then Mexx decided to introduce the brand in Egypt in 1991 and India in 1993, and I was selected by top management to spearhead these projects.

“All the great artists were rebels and I am, too.”

Both Egyptian and Indian cultures were my favorites as an art history student, and as a textile admirer I respect the centuries-old traditions behind making Egyptian cottons and Indian silks. Every aspect of the Mexx brand had to be locally made: the retail architecture, production, marketing and merchandising.  Case studies at Webster University helped me understand the P’s for success or failure, and my art history lessons prepared me emotionally for the forthcoming resistance.  My colleagues – Christian Syrians, Muslim Egyptians, Muslim Indians, Hindus, Zoroastrians, Sikhs, Buddhists and Jains - sensitized me to their various local cultures, religious practices as well as the environmental and political climates. All these factors affected local fashion statements and choices. Ideas about what was “acceptable” and “decent” restricted Mexx’s choices in colors, skirt lengths, transparency and skin exposure.  Mind you, this was 1991-1996, when exposure to almost anything Western was radical and possibly controversial.

The living conditions in Egypt and in India made me question my values. I was a young mother, driving in the high-speed lane of fashion. Was it really all necessary? In 1995, I attended one of the first international conferences on social responsibility in Lucca, Italy, where Anita Roddick of the Body Shop would be honored. Other thought leaders like the Director of Benetton’s artistic think tank, Fabbrica, at the forefront of global sustainability, would also be present. I returned to the Netherlands, totally inspired and full of ideas about organic cotton, social auditing and transparency at production sites to build a truly sustainable brand based on all the right values.  How disappointed was I when all my cheerleading efforts fell on deaf ears and Mexx management ultimately took my megaphone away.

On the Road Again

It was my first big WTF moment. My disappointment in the corporate world and the state of the planet led me to what I can now say was my soul-searching journey though it was no straight road.  In 1996, I founded the Netherlands’ first concierge company to help working women with “professional appearance” tasks like dry cleaning, tailoring and shoe repairs and then sold it to a company that took the concept nationwide. In 1997, the Benelux Body Shop Director asked me to introduce and launch the French nature education retail concept Nature et Découvertes in Amsterdam. I realized Mother Nature didn’t want me to “sell her.”  For a while, in 1998, I worked for an independent film distribution firm, chasing money and movie stars - not really gratifying. After the birth of our second child, I looked at my talented husband and said, “You know what? I want to work with you.”

“I thought just embrace and accept everything.”
So here we are 2017; Studio Schrofer has survived two economic crises, won some major design awards, and is now striving for democratic design on multiple levels.  We use design – word and form, engineering and craftsmanship – to create a world where comfort is a right and not a luxury. That’s worth cheering about, don’t you think?

I travelled the world. I loved the art, fashion, customs and traditions. I have seen how the Indian caste system limits human potential, just as in Egypt, where people get treated based on the kind of Muslims they are. I thought: Why not just embrace and accept everything?  When I accepted myself, it made my life so much easier. It gave my mind the room to expand. The world has so much to give; people have so much to give. You just have to tap into these resources, and everything can be solved.