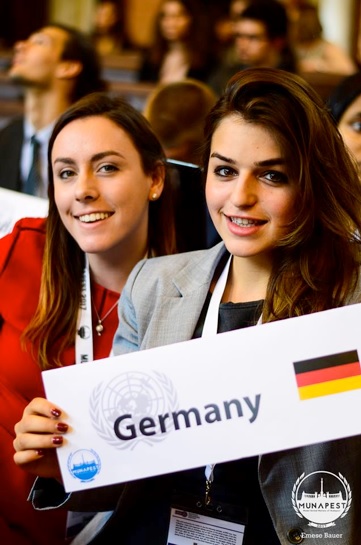 The Webster University Leiden delegation returned from Munapest – Model United Nations of Budapest with accolades from across the conference. The annual event is held in Budapest, Hungary from April 11th-15th.

Two students from the International Relations program, Vesna Ratkovic and Oliviana Bailey, were awarded for their work on the Ambassador’s Council (Ratkovic) and the Sanctions Committee (Bailey). As a group, the Leiden delegation represented Chile and Germany. Two members were also press delegates representing New York Times and Notimex, the Mexican state-news agency.

This year marked the second Munapest for Ratkovic and her third model UN conference, the first being in 2015 at “Web-MUN,” organized by Webster University-Vienna MUN Association (WebMUN).

But there were even more firsts, or seconds, for Ratkovic in Budapest. Her honorable mention from Munapest will go along with her “best delegate” award from the 2015 Webster event.

“I was not expecting it back then,” Ratkovic said, “But it got me excited for future conferences.”

Ratkovic held a seat on the Ambassador’s Council, a group deemed expert-level by the organizers of Munapest. But the council was not a “normal” committee in the capacity of drafting resolutions focused on specific topics.

“Our job as ambassadors was to guide our delegates in other committees to insure all were acting in accordance with our country’s national policies and values,” Ratkovic said.

Slack for the win!

Aside from doing a great job, the decision-makers granting the awards also looked at the Slack© feeds of the participants to get a measure of how well delegations used the instant messaging platform to communicate with their respective groups.

“They said I was very active in insuring all of my delegates were well-informed of the other positions coming from different committees,” Ratkovic said. “I was surprised. As Germany, I had to be slightly less-aggressive; I had to use ‘soft’ power.”

Bailey was in an intermediate/expert-level committee with her group.

“It was introduced as part of a greater resolution,” Ratkovic said. “But the ambassador from Italy had great difficulty with one of the clauses and in order to reach consensus, we had to take out the treaty.”

Bailey completed a BA in business with a double-minor in accounting and philosophy from Marymount Manhattan College in New York City. After taking a semester off to seek internships at the U.S. Dept. of State, she finished undergraduate by going abroad twice; at the University of Limerick in Ireland (2014) and at The Ipag Business School in Nice, France (2016).

In addition to the treaty, the Webster-graduate student also worked to develop a law-enforcement structure in Latin America which included Interpol, bringing a worldwide apparatus to assist the region.

“The countries within the Sanctions Committee were on-board in terms of having an investigative-team approach to deal with corruption,” Bailey said. “And truthfully, I thought this clause was more controversial than the other that didn’t make it through.”

From Budapest to Kiev

The awards were given at the end of the General Assembly on the final day of the conference.

“I was, actually, really shocked,” Bailey said. “I thought, ‘Maybe me?’ but at the same I didn’t think I would get there because of the computer problems I was having. The chairs were thinking, ‘She wasn’t quick enough.’”

While at Munapest, Bailey took time to talk with the Webster-Vienna delegation about their upcoming model UN.

“They were on-board about doing a trip together to go to Kiev,” Bailey said.

The Ukraine trip would coincide with Webster-Vienna MUN in October and will focus on environmental politics and energy security. A side-trip to Chernobyl is also being planned for the week.

In addition to Ratkovic and Bailey, the New York Times press delegate – Nander Hokwerda – brought home the award for best press delegate. While not a student at Webster, Hokwerda is active in the Webster Leiden MUN Association.