Student in the Spotlight with Evelyn Demirchian 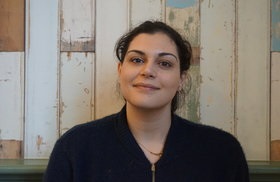 Evelyn Demirchian is pursuing a Master’s Degree in Psychology at Webster Leiden. In this interview, the California native discussed her background and what she would like to do after she graduates.

Student in the Spotlight: Evelyn Demirchian
By Brandon Hartley

I was born and raised in New York City and then I moved with my family to the west coast. I attended Fresno State University. That’s where I earned my degrees in Print Journalism and Middle Eastern Studies. I did a lot of work in journalism before I dove into psychology.

Why did you decide to transition from journalism to psychology?

Whether it’s journalism or it’s psychology, you’re working with people. You’re trying to observe and understand how they function either on an individual, community or state level basis. You’re also getting stories, telling stories and you’re trying to communicate that one way or another. With psychology, it’s more hands on. You’re able to create interventions to help people whereas with journalism you’re trying to stay out of the picture and remain as unbiased as possible. In psychology you can delve a little deeper.

Why did you decide to pursue your master’s degree at Webster Leiden?

I’ve always been in love with this country and Leiden was the first European city that I visited. My best friend grew up here. I came to Leiden years ago and I thought it would be incredible if I somehow was able to go back. When the opportunity came to apply to graduate programs, this one popped up on the list and I thought “of course. I have to go.” I’ve been here two years now. I did a Post-Bachelor’s in Psychology and I started my master’s degree last August.

What have been your favorite classes?

It’s too soon for me to say for my master’s degree but in the undergraduate program anything I took with professors Christine Fitzgerald or Despoina Kairi completely blew my mind. They’re two of the greatest instructors I’ve encountered during my entire university career.

What would you like to do after you graduate?

I’ve invested a lot of time into the Netherlands so I’d like to stay here and see what pans out. So much of my social support is here now. I really do think there’s a lot of great opportunities. I’d love to work with a company or an organization, whether it’s in human resources or something like a guidance counselor for students. I’d eventually like to get my PhD and hop into media psychology. I think it would be incredible.

Ceviche! My close friend gave me her father's recipe which I've been obsessed with all year.

The film trailer for Terrence Malick’s Song to Song.

9. Europe or the United States?

10. What three items would you take to a desert island other than food and water?

SPF 45, a satellite phone and tobacco.