“For a total of 82 graduating students, we have an astounding representation of no less than 38 countries, spanning across 5 continents. If there is such a thing as a global education – this is it,” Ratkovic said.

Throughout the program, impacts of the diverse pursuits the Netherlands offers were on display; commencement speaker and Diplomatic Security Agent Vanessa Freeman said the path to her current post started during a camp-counselor job while at the University of Pennsylvania.

After an embassy assignment in Egypt, then to Regional Security Officer(RSO) posts in Pakistan and Slovenia, Freeman now handles more than most RSOs as U.S. Ambassador Peter Hoekstra’s senior staff at the new embassy compound in Wassenaar. Freeman related some career choices the fresh graduates might face; and what consistent, high-level work looks like, day-in and -out. An asset Ratkovic learned about first-hand at Leiden.

“Keeping a consistent level of quality, even when there were a lot of assignments due - that was a challenge and required great dedication,” Ratkovic said.

From MUNs and WebTalks

The ‘personal best’ of double-major graduate Jose Weinberger, along with Ratkovic, was being a co-founder of the Webster-Leiden Campus Model United Nations Assoc.(MUN). Weinberger served as treasurer and Secretary General; the work involved teaching students to prepare for MUN conferences.

“The club gave students not only the opportunity to represent the university abroad in Budapest and Vienna, but it also gave students a chance to put their theoretical knowledge of international relations (IR) into practice,” Weinberger said.

Gashi and members of the Leiden delegation to the Global Student Summit in Vienna came up with the idea last year. Gashi said WebsTalks, initially, was designed as a platform for students to present their theses to the greater Webster community.

“But then it evolved into what we have today,” she said, “Not only have some Webster alumni had the opportunity to come present about their lives and work, but we've had the honor of hosting largely experienced professionals and the event is becoming a bigger success each time.” 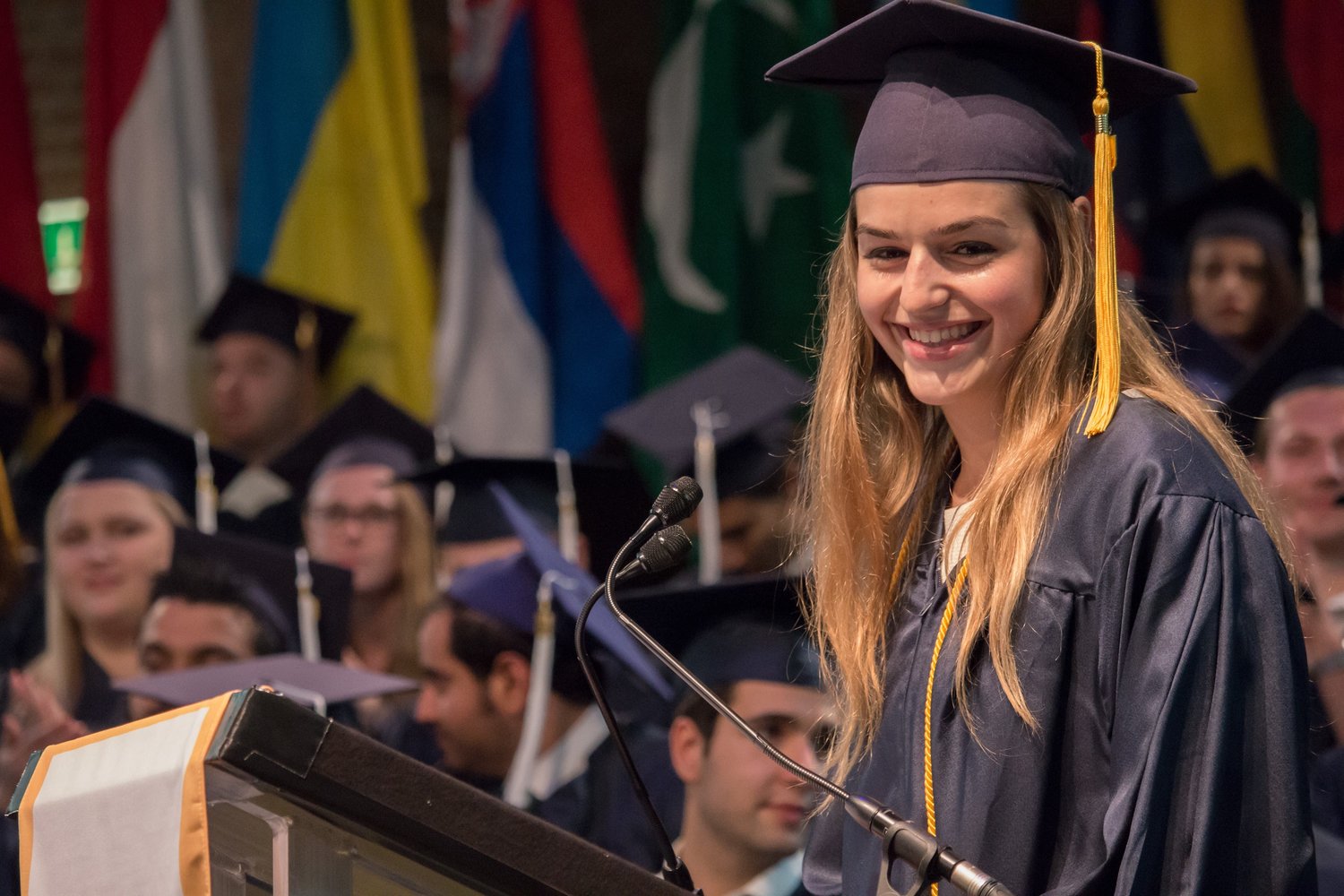 To advice on future obstacles

The two leaders’ success was not without challenges:  motivation – a key theme of Freeman’s speech – was one of their biggest hurdles in organizing MUNs and WebTalks. Gashi said the organizational roles helped shaped her leadership style.

“I had a very different approach towards working with others prior to this experience, so it has been challenging, but I am very grateful and definitely feel more prepared to be dealing with similar roles in the future,” she said.

To Weinberger, finding the right way to motivate different students was a key to the success of the MUN Assoc.

“Everyone is motivated by different things,” he said. “I found it was a great way to put my learned knowledge from my management degree into practice - learning to manage the student body to get the best out of every student.”


Being persistent paid-off for the two student leaders, leaving Gashi with a wealth of advice for future first-year students at the Leiden-Campus.

“Tackling studying at university took some getting used to,” Gashi said, “If there is one piece of advice I would give to a college freshman, is to be patient and trust the process; things may seem confusing in the beginning but if you don't give up everything starts to make sense.”

To ending on a high-note

Between the speeches and processions of diploma-receiving students, media communications-psychology major Artyom Napolskiy accompanied vocalist Josyln Valente on guitar for an acoustic performance of “Catch and Release” by Matt Simons and “On the Radio” by Regina Spektor. Valente also received a degree in IR during the ceremony.

Gashi graduated with a bachelor’s in business administration and a minor in psychology, both with departmental honors; a leadership certificate through Webster LEADS; the European Scholar Award; and recognition through the Delta Mu Delta International Honors Society.