A new inductee adorns the Hall of Fame wall at Webster Leiden Campus. On November 1, Roelof van Laar was honored at a ceremony held on campus. The Hall of Fame of Webster Leiden Campus was established in 2014 to honor alumni who have made significant contributions to their chosen competitive areas. Alumni who have demonstrated excellent academic, professional and/or community achievements. Roelof van Laar is the 4th alumni receiving this award. Leiden Campus director, Prof. Dr. Jean Paul van Marissing had a one-on-one conversation covering Van Laar’s early childhood experiences leading up to his early interest in politics and human rights. Van Laar’s humanitarian career took him from early trips to the Middle East on to four years in the Dutch Parliament. The interview highlighted the remarkable journey:

- What is the best experience that you remember from your childhood?

“The first thing that came to mind was horse riding, it was a family thing. My worst memories      are from bullying; so, if you talk about seeds – I have always thought of that as the first ‘seed’ of   why I hate injustice, why it annoys me so much and energizes me.”

“Another defining thing was, my parents were a host family for children coming from war areas. They came from Bosnia and Croatia through refugee camps in Hungary. And, that’s the first time I realized there are other children in the world who are growing up in circumstances much  different than mine.”

- When did you become a member of a political party, and why?

“I was 18 years old and I already had political ideas. Mostly, I was encouraged by my father,  who was a staunch supporter of the VVD, the liberal party in The Netherlands. So, I thought I  was a liberal too. But after I joined a project in the Middle East one summer… that really  awakened me politically – I thought young people should be involved; now I wanted to choose  my own party (PvdA, the labor party in The Netherlands).”

- What were your expectations at the time?

“I thought we could make a difference; I still felt that young people should be involved, so we (PvdA) wrote a letter to the prime minister saying there should be more ways for young  people to have influence in politics. We got a letter back saying, ‘If you want something to change, you have to start yourself, so that’s what I did.”

“Actually, I’m too honest to be in politics. I tend to say what I think, and I usually announce  what I’m going to do. I’m not a friend of everybody and it was never my goal. But there were  friends, because they knew when asked a question, I would give a straight answer.”

- What was the best experience you had as a member of parliament?

“It took us quite some time because there are, actually, a lot of trade agreements and labor   treaties which prevent you from making a law like that. But we found a path, and, in the end, we got it passed and it was just a month before the elections.”

- Every year we ask in inductee to bring us a quote. And this is your quote: “We have a responsibility to use our talents to reduce injustice in the world. What can you do to improve the lives of children and the most vulnerable?.” How do you define this responsibility?

“In a setting like this… there are a lot of things going good in our lives. Not everything is ‘roses  and sunshine’ all the time, but we have a lot of talent and a lot of potential to use that talent.  And I think, part of that talent you should use to make the world a little bit better of a place, a fairer place.”

“And when you are talking about the pollution of children, that is exactly what it is about – children are the most powerless; they have no right to vote. They have no way to move from  where they are; they are born into a system which makes them the most vulnerable.”

- What can just one person do to make a change?

“You can join an NGO. You can even start one; contribute to an NGO in any way you like. Even if you just organize a fundraiser. It’s not a big thing you have to do. You don’t have to clean all the air yourself.”

Roelof van Laar is the author of two books -- Eerlijk duurde niet zo lang (Honesty did not last that long) and Een meisje als Roopa: De strijd tegen meisjeshandel (A girl like Roopa: The fight against trafficking in girls). He founded Free A Girl
in 2008 and served as an MP in the Dutch parliament from 2013 - 2017. Currently, Roelof is responsible for the initiative Children’s Right Challenge. Roelof van Laar studied political science at Leiden University and earned his MBA from Webster Leiden Campus in 2014. 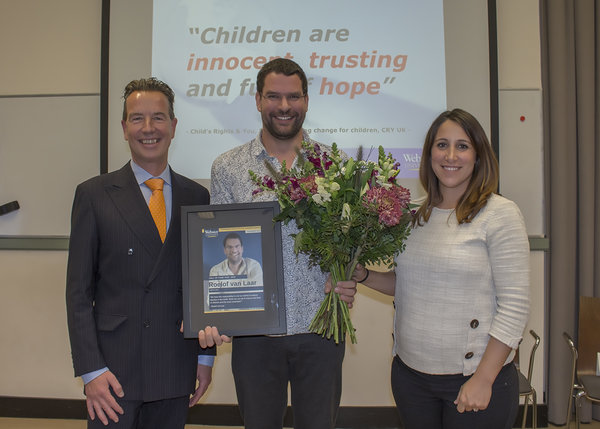